Dropped Your Phone in Water? Here’s What to Do Next 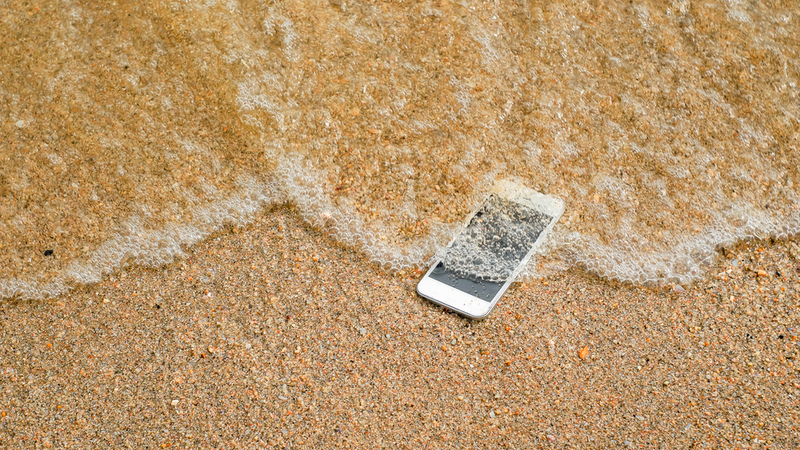 One of the worst things that you can experience with your smartphone is the moment that you accidentally drop it into the sink or toilet, or any other body of water. Although some newer handsets are waterproof to a considerable depth, like the Samsung S8 and S9, this isn’t the case for most older phones, which could soon be unusable unless you act fast.

Although there's no guarantee that a non-waterproof phone will be salvageable, there are some things that you can do immediately after the incident, which might help to rescue your device.

Take it out, quickly

When your phone hits the water, your first instinct is probably to panic, but what you should do is immediately get it out of there. The longer that your smartphone spends under the water, the worse your chances are that it will be recoverable, as the water will have more time to seep into the various ports and crevices on your device’s exterior.

As soon as you've fished it back out, immediately make sure that it's switched off and do not turn it back on again. Though an active phone might initially seem fine, it can take a turn for the worst. If you can get the battery out of it, be sure to lay out the phone and the battery on paper towels to air out.

Thankfully, modern smartphones are generally more resistant to water damage than the older generations that came before them, even those that are not waterproof by design. Regardless, once you’ve retrieved your phone, there are some things that you should absolutely avoid doing.

What not to do

Before we move onto what you can do to try and preserve your device, we're going to cover a list of things that you shouldn't do:

When we say the non-essential components, we're talking about the phone case, SIM card, battery, and any other storage media you might have in an Android phone. This last point won’t be applicable to an iPhone, which doesn’t have any support for external SD memory cards. These are all easily removable for a consumer, but you should never start trying to disassemble the phone’s inner components, as you’ll likely end up damaging your phone beyond repair if you have no experience in doing this sort of thing.

As we have already mentioned above, consider laying out your phone on a paper towel to allow the above components to air out individually. If there is excess moisture inside of your phone case or on your battery, pat it dry and avoid moving the water around too much.

This is the most time-consuming stage, and the point at which you might be tempted to switch your phone back on if everything looks like it has dried out. Don't do this! Although the excess water may appear to have evaporated away from the battery, SIM card and phone case, some molecules could still be hanging around inside of the device.

All you need to do is place the phone somewhere where it can lay undisturbed and air out completely, ideally for around 2 to 3 days. A popular piece of advice is to place the device inside of a food bag with some uncooked rice, as the food absorbs moisture from the surrounding air when stored in a watertight container. The idea is that the rice will take on any humidity in the bag, drawing it out of the phone’s components.

Of course, if you have no rice or don’t want to go to this much effort, you could just leave your phone and its parts to dry in a warm environment. An airing cupboard that doesn’t heat up considerably is a viable alternative to using rice.

Once you've followed the above advice, and after several days have passed, it's time to reassemble your phone and see if you've saved it. If it's still dismantled, then put it back together, plug it in, then attempt to power it on. If all looks OK from the offset, then chances are that you're in the clear.

It’s worth trying to make a test call, checking that you can access the internet, and trying out the camera, to make sure that your phone is working normally. Bear in mind that you could see some generally strange behaviour for the first few days afterwards.

Not fixed the problem?

Unfortunately, the above advice won’t save them all. Some older phones that are less resistant to water will only need a few seconds underwater to be lost forever. If you’ve recently dropped your smartphone into the bath or toilet and need some advice, then you can speak to WiseGuys on 0808 123 2820. We have device coverage that could help you, should you encounter the same scenario in future.